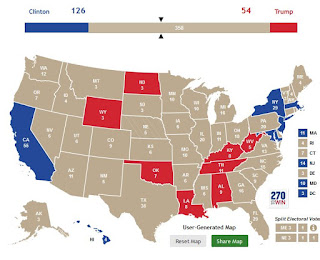 But...but.....a Third Party Vote is a wasted Vote! How many times have you heard that plaintive cry during the 2016 election season? Or the usual follow-ups: "A vote for Johnson (or Stein) is a vote for (Fill-in-the-Blank: Trump or Hillary!)"

It seems that every strong Clinton supporter, and every strong Trump supporter (or, perhaps more accurately, every Anti-Clinton Voter and every Anti-Trump Voter) has been working overtime in the mainstream media and on social media to convince people not to vote for a third party in 2016. "After all, they won't win...and that will only help Candidate X win," they say. They don't seem to understand that even if there were no third parties, I would not vote for either Clinton or Trump.

And to be honest, many of them try to give me constructive advice: "Please, this is a two-party nation, and only one of the two major party candidates can win. Why don't you work within one of the major parties to make effective change instead?," they plead.

Because history has shown that won't work.

There are only two factors that motivate party policy.

The first is money. And sorry, I don't have enough to influence either party in that respect.

The second is votes - and more important, winning elections.

When they win, they assume they touched on the right issues in the right way, and ran their ground games in an effective and successful way. If what you want is more of the exact same nonsense that both major parties have handed out, then by all means, vote for a major party. They will assume that their win means they did everything correctly, and you can expect more of the same in the years to come.

When they lose, they must admit that they did something wrong, and begin the process of looking at polls and votes and voter turnout rates to see where they lost ground.

Want to send a message to the major parties to make them seriously examine what they have done this election cycle? FORCE THEM TO RE-EVALUATE WHAT THEY'VE DONE.

It is a Media cliché at this point to speak of 'blue states' and 'red states' and 'battleground states.' But the number of states on the edge is far bigger than anyone could imagine this year.

This year, in 36 states, polls show that the combined support for Libertarian Gary Johnson and Green Party candidate Jill Green exceeds the margin of difference between the Republicans and Democrats. These states represent 358 Electoral votes: far more than the 270 needed to win.

The table below indicates the margin of difference between Clinton and Trump, and the combined 3rd Party support, as published by the Washington Post 50-state poll on September 6: 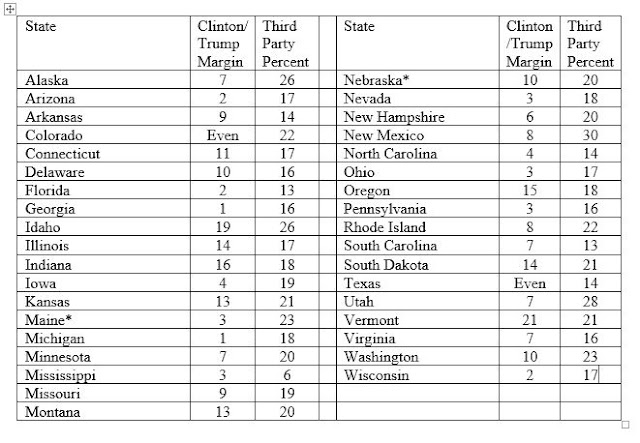 *Maine and Nebraska assign their electoral votes by Congressional District, increasing the volatility of the election in these states.

And, to further drive home the point, here is a map (courtesy of 270towin.com). Red states are runaway Trump, Blue states are runaway Clinton, and the Grey states represent those states where the 3rd Party support now exceeds the difference between them: 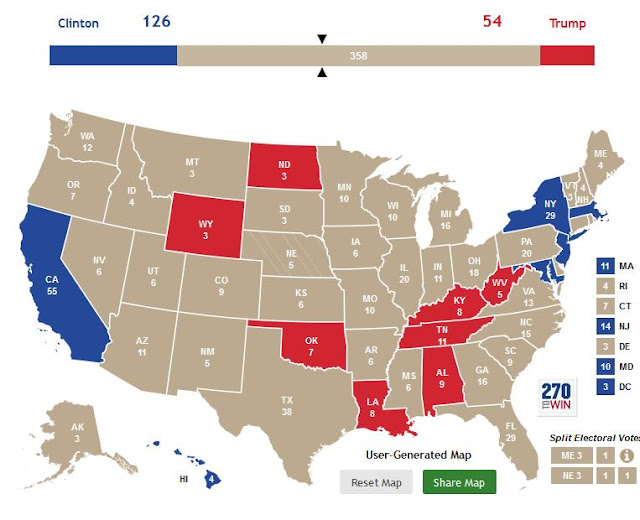 So there you have it.

Are the chances slim that a 3rd Party candidate will win the election outright? Yes.

Are the chances large that the 3rd Party vote might tip an election in some of these state one way or another? Yes.

Are the chances even larger that a party that loses a state - or even comes close to losing - will need to examine what they're doing wrong? ENORMOUS.

No, your vote for a Third Party is not a wasted vote; rather, it is the most significant way you have demanding change in the system.