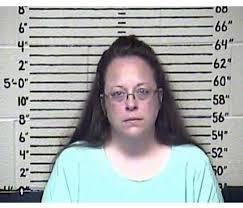 Dear Kim, I know you are presenting yourself as a victim of persecution: persecution of religious folk who simply want to excercse their faith, persecution by a totalitarian judiciary that is imposing law on average citizens, persecution by a vocal and strident gay minority who are insisting on violating your sincerely-held beliefs, conscience, and deepest religious convictions. Think Again.

First, let me introduce myself to you. I am a Christian. I am a Gay man. I am an attorney who fully embraces the civil liberties enshrined on our Constitution.

You, Madam Clerk, insist that you are being denied your right to live out your faith. I call Balderdash.

The First Amendment has a long, time-honored and cherished history in this country. It reads, in part (in case you haven't actually read it) as follows:

Amendent I: "Congress shall make no law respecting an establishment of religion, or prohibiting the free exercise thereof..."

Amendment XIV: "No State shall make or enforce any law which shall abridge the privileges or immunities of citizens of the United States."

A lesson in civics, dear: Counties are administrative units of States. When you act as County Clerk, you are acting under the authority of the State - not as a private citizen. You are therefore bound by a Constitution which mandates that States must abide by the same rules as the federal government when it comes to citizen's rights. And what are our rights? To not have a particular religion and it's doctrine 'established' as official policy.

As a private citizen, you may believe as you wish, protest as you wish, worship as you wish, and even campaign for a Constitutional Amendment to overturn Marriage Equality.

As an agent of the State, you may not impose or establish a religious test on the citizens. It's very, very simple.

But I'll take it even further: As a Christian, you need to stop speaking for the Church, speaking for God, and making grand pronouncements about what you believe the Bible requires as if your position is Infallible In fact, dear, your statements are erroneous at best, and blasphemous at worst: you have presumed to speak for God on the issue.

Millions of Christians in this nation support same-sex marriage. Numerous denominations have endorsed same-sex marriage, ordination of gays and lesbians, and full GLBT equality. For you to presume to 'declare' what is or is not biblical, or Christian, or "God's Position" on the issue is the worst form of arrogance: you presume to speak on God's behalf. Shame on you.

Your approach is not supported legally, Constitutionally, or theologically.

It's time to retire from public life, consider the damage you have done to other Christians and Kentuckians by association, and reconsider your self-righteous, self-aggrandizing motivations.It's bad enough you have made a fool of yourself and a circus of Rowan County - but in addition, you have betrayed your faith, your God, your public trust, and your Constitution.