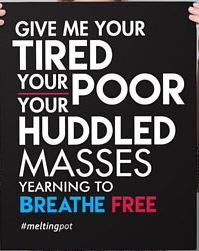 To all my 3rd and 4th generation-American friends who are complaining about immigrants who "broke the law" and came here "without papers"....how the hell do you think YOUR ancestors got here? And before you shout out, "They came legally and went through all the paperwork!," listen up.

No, they didn't. They didn't have paperwork. Your Irish ancestors who arrived in the "coffin ships" during the famine had no papers. Neither did your Greek, Italian, and German ancestors fleeing war.

Many did not know what day they were born on, because they didn't have nice pictoral calendars on their non-existent refrigerators. In fact, they were born at home, and had no birth certificates. They not only lacked a college degree, they lacked a high school degree. They had no social security cards or driver's licenses, because they didn't exist.

They arrived penniless. Paperless. With little knowledge of US government, the English language, or basic literacy. They arrived at Ellis Island, had an eye test and a TB test, and some official gave them an "americanized" name because most didn't know how to spell their own names so the immigration officers guessed.

The Dreamers you're bitching about now? *These people are no different than your grandparents and great-grandparents, folks.* It's just that now you've 'made it' so you want to close the door on the next wave who just want a better life.

Before you bitch about them, go into a quiet room and ask your great-grandma up in heaven what she would say about the immigration experience, the hope of America, and the heartbreak and obstacles she encountered. Ask her what she would have done if after being here 15 years, she was threatened with being
sent back to Europe. And ask her how *she* sees those threatened by Trump's reversal of DACA.

End of rant.
Posted by Thom Simmons at 8:18 PM 0 comments 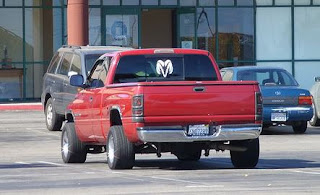 Intuitively, students understand how ridiculous this is. They conclude that while they could, if absolutely necessary, do these things, it is highly inefficient. The time and effort needed to undertake these actions means would require so much of their effort that they would have to give up engaging in other activities - such as washing their clothes, going to work, or studying for school. They understand quite easily that it makes far more sense to do what they do best - wait tables, work at a retail store, stock items in a warehouse - and then use the fruit of their labor to purchase those goods they do not or can not make as efficiently (such as a T-shirt, a can of coffee, or a piece of lumber.)

That, of course, is the basis of trade: nations do what they do best, and trade for those items that others produce more efficiently.

Mexico is the United States' third largest trading partners. In spite of the social media comments by those who insist they don't buy Mexican goods anyway, we import - quite cost-effectively - billions of dollars of goods from Mexico annually. Beer. Washing Machines. Chevy and Dodge Trucks. Medical Equipment. The United States imports a total of about $295 billion per year from Mexico, including $74 billion worth of vehicles, $63 billion of electrical machinery, $49 billion in machinery and $21 billion in agricultural products. Mexico is the second-largest supplier of agricultural imports to the United States: tomatoes, limes, lettuce, avocados, and more.

Trump's current proposal is to pay for his wall with a 20% import tariff on Mexican goods. Applying this 20% tax to $295 billion worth of imports would result in an increase in prices to the tune of almost 60 Billion dollars annually.

How would this affect Americans?

Well, once again, let's break this down into understandable personal transactions.

Let's say that I have $100 in my pocket. I go to the store to purchase a tricycle for my child, and it costs $50. I can buy this tricycle for $50, and still have another $50 left in my pocket to spend elsewhere - a pizza for the family for dinner, a bouquet of flowers for someone on their birthday, and one or two new pair of blue jeans.

Now let's say that tricycle was made in Mexico, and now there is a 20% tax on top of that price. Instead of $50, that tricycle now costs me $60, and I purchase it. But wait, now I only have $40 left in my pocket instead of $50 - in other words, i have $10 less in disposable income than I had before.

Who loses? I have to give up some other purchase: either the pizza, or the flowers, or one of the pair of jeans. Some American business must lose out, because I no longer have the ability to purchase the same number of goods I could before.

Now multiply this times all the consumers in the American economy. With the tax, $60 Billion dollars less is available for spending in American businesses.

But it gets worse.

Let's say that, due to this new tax and my lower disposable income as a result, that I decided to skip buying the flowers at the local florist. If I *had* purchased those flowers, the ten dollar bill would not have sat in a cash register: the Florist may have used some of that to buy ribbon from a ribbon manufacturer, or to buy some vases in which to display flowers, or to pay their delivery man. And of course, that delivery man would then have used that income to purchase something for himself - perhaps a new windshield wiper, or a baseball for his child, or a ticket to a local performance.

And since I couldn't buy those flowers, none of those transactions took place.

And now, multiply that by $60 billion dollars which will no longer multiply throughout the economy.

The 20% tariff may be a great way for the President to buy political capital and 'pretend' that Mexico is paying for his wall...but the reality is that Americans will pay - over and over - as the economy takes a hit it can not afford to take.

Thomas Simmons is a graduate of Hofstra University and Hofstra Law School, and has worked as an Economist for the last 30 years. He is the author of three college textbooks on Economics.