Sanitary District 2: Will the Politics of Destruction Trump Honesty? 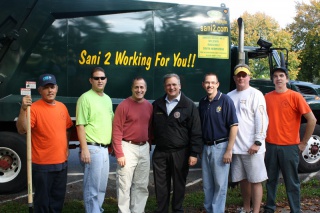 I was raised for the first 24 years of my life in Baldwin Harbor, on Long Island’s south shore.  Born into – and living among – other blue-collar, working class families, I was a Republican for most of my life.

But, as happens to many of us, time and experience change us, and I have since become an advocate for largely liberal and progressive causes.  As I eye eventually returning to Long Island in my retirement, I have looked at the political party structure in New York, and found myself drawn to the Working Families Party, a recent addition to the NY electoral scene with stridently liberal views.  Sustainable development, energy sanity, environmental stewardship, and election reform all make more sense to me than ever before.

How disheartening, then, to discover that, like the major parties who use the money and muscle of Super PACS to do their dirty work,  the Working Families Party is no different.  Operating under the parallel name of the “Long Island Progressive Coalition,” and, most recently, by the fly-by-night invented group, “RESD” (Residents for Efficient Special Districts), these so-called progressives are anything but progressive, good-government advocates; rather, they have become as nasty, dishonest, and destructive as the  Republican and Democratic SuperPACS.

The current battle – to be settled at the polls in a few days (December 12), is an effort to dismantle a special sanitary district – “Sani 2” – serving 55,000 people in the communities of Baldwin, South Hempstead, and Roosevelt on Long Island.  The stated purpose for the drive to dismantle the district is ‘cost savings,’ though no credible figures have been supplied yet.

Let's cut to the chase: the entire circus is an invention of a failed candidate for Sanitation Commissioner who, in a fit of super sour grapes, has decided that if she can’t rule the district, she will ruin it.

In 2005, Laura Mallay ran for election as a Commissioner against incumbent Gerard Brown. Apparently, at the time, she felt the special district was important enough to ask voters to give her some responsibility in managing it.

But Mallay didn’t quite understand that Long Island voters do not simply ‘award’ politicians with an office simply because that politician wakes up one day with a brilliant idea and expects applause.  Mallay was trounced in the election, losing by a margin of more than 20 points.

So, rather than consider why voters rejected her, she invented a group, “RESD,” annointed herself as its Executive Director, and began a campaign to force a vote to dissolve Sanitary District 2, and to have 55,000 residents' garbage, recycling, and hazardous materials handled by some other as-of-yet unspecified entity.

"The District," claims Mallay, “is not economically sustainable.”

This, of course, flies in the face of the reality of the District’s existence for some 85 years, and the fact that the District’s annual budget increases for the last five years have been less than the annual rate of inflation...meaning that the District actually continues to more with less, and becomes more efficient each year.

Mallay has compared Sani 2's costs with other districts, and found them to be higher.  But Mallay’s calculations conveniently neglect to mention that Sanitary District 2 engages in additional, non-mandated activities that improve life for its residents, increase environmental quality and awareness, and which are not carried out by other ‘cheaper’ services. 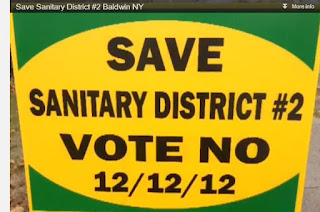 Sanitary District 2 purchases bulk oil contracts for other area services, saving the local fire departments, school districts, and, therefore, taxpayers -   thousands of dollars annually.  Unlike other sanitation departments, they sponsor community cleanups, waterways cleanups (the picture above is from the recent Milburn Creek cleanup), graffiti removal efforts, and greening/planting projects. The value added to the community by this community-run district is enormous.

But that means nothing to Mallay, RESD, and the LI Progressive Coalition. Rule or Ruin is the battle cry.


Flyers promoting district dissolution fail to reference any credible  sources for their secret financial information. As an Economist, I see this as a highly troubling - and disingenuous - aspect of their campaign.


Letters delivered door-to-door this weekend failed to even contain a single signature assigning responsibility for their tirades. And in fact, almost 100% of the effort to destroy the district is coming not from within the district, but from paid campaign operatives who live nowhere near Baldwin or Roosevelt.

Meanwhile, the workers at Sani2, while understandably concerned about being tossed to the curb themselves if the vote to dismantle the district passes…have become heroes to those who know them best. 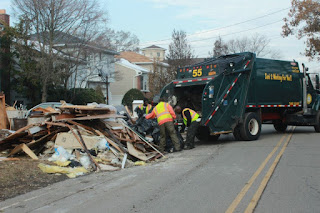 One month ago, Hurricane Sandy slammed Baldwin Harbor with unprecedented fury. Neighborhoods that never saw water found themselves under several feet. Rugs, furniture, soaked sheetrock, and personal belongings of every kind were heaped in traumatized residents front yards. When destruction like this takes place in an area several square miles large, how do you even begin to deal with the clean-up?

The employees of Sani2 – all of whom are working-class, home-town local community members – worked round the clock for weeks to help homeowners sort through the wreckage of this storm.  While Mallay was safely ensconced in her dry home and political headquarters elsewhere in the state, the working men of Sani2 whose jobs are on the line performed Herculean tasks to clean up their community and share the heartbreak and burden with their own neighbors. 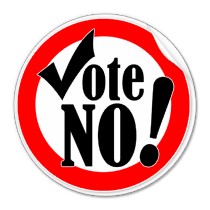 If sanity prevails, the voters of Baldwin, Roosevelt, and South Hempstead will see this charade for what it is, and soundly defeat the effort to dismantle an 85-year old community institution.

And if the Working Families Party has any sense, they will distance themselves from the loose cannons that have taken control of their Long Island apparatus.

A Commerce City, Colorado police officer was caught on a now viral video shooting a captured dog five times. Neighbors are outraged as they say the shooting was unnecessary, as well as unsafe.

The tragic shooting of 3-year-old Chloe, a pit bull-labrador mix, took place in an upper middle class neighborhood of Commerce City. The home owner, who had custody of Chloe at the time of its shooting, was taking care of the animal for her cousin. She has asked to have her identity remain private.

Chloe was given a bed in the home owner's garage, and she then went to work. Not having an animal, the home owner did not anticipate the possibility of her garage door's automatic opening mechanism being activated by Chloe. Unfortunately that scenario is exactly what happened.

With the garage door now open, Chloe was then free to wander about the neighborhood, doing what any other domesticated dog would do. Sniff and pee on things, marking her new found bastion of territory.
A neighbor, Kenny Collins, saw Chloe and did not recognize her and called police. Not because he felt threatened, but simply because the dog was loose and he did not want it to get hit by a car.
According to coloradoan.com, Collins stated:


He never came at me in an aggressive manner.

When police arrived Collins' son took it upon himself to record the officers. The video shows officers having cornered Chloe on its own property. An animal control officer was also present. Chloe was feet from the bed that was given to her by the homeowner. Commerce City police can be seen on video twice attempting to use a tazer on Chloe. After that method failed the animal control officer, who is a highly trained professional, used a tool known as a catch pole to capture Chloe.

The animal can be seen attempting to flee the garage after its neck was caught in the catch pole. This is a natural response for any animal, and it is why the pole was designed, to allow animals to be controlled from a distance.

This is when the Commerce City officer opened fire on Chloe, shooting her five times, killing her within seconds.
Kenny Collins is absolutely outraged. He claims he did not call police because Chloe was violent. He also believes his life and his family's lives were put in danger by the action of the officer. Preliminary reports show that six shots were fired. Five struck Chloe, and one struck a Commerce City police cruiser. Collins says that the bullet which struck the car would have easily struck any one of the members of his family, including himself. He said on the record:


That bullet was fired in my direction with me standing across the street.

Naturally the Commerce City Police Department has an entirely different take on the situation. They released the following statement:

After reviewing the video multiple times, it is evident that the statement by the police is a blatant and baseless lie, and is an attempt to cover-up an abuse of power. At no point does it appear that Chloe was attempting to attack anyone, let alone repeatedly attempting to attack. The neighbor who called animal control said that the dog was not aggressive.
It is odd how the animal became a "threat to the community" only after police arrived.
More questions remain and a detective with the Commerce City police department named Mike Saunders spoke locally with 9Wants to Know and reaffirmed the officer's killing of Chloe:


Yes, the dog was on the catch pole. But, it was the officer's concern that the animal control agent wasn't able to maintain control of the animal and the fear was that the animal was going to come off the catch pole and attack the officers or get loose and run back into the neighborhood putting citizens in danger. They attempted to taze the dog twice however that had no effect on the dog.

The summation by the detective is nonsensical. The animal control officer is a trained professional. They are trained in the fine art of dealing with wild animals. Everyday, all day long. Police officers, however, do not deal with wild animals on a daily basis.
With that common sense in mind it begs the question of what authority did the officer have to second guess the abilities of the trained animal control professional? Chloe was restrained by the catch pole. The rational is because a police officer doubted an animal control officer's ability to do their job that an innocent dog was killed? On what basis do they make such a judgment? Their own irrational fears, because they don't work with animals?
Chloe did not attempt to attack anyone. She was in a strange place, with strangers surrounding her, trying to place her neck into a noose. The natural inclination of any animal would be to run, and that is precisely what the video shows.

A Commerce City city council meeting is currently underway to discuss the shooting of Chloe.

A Facebook community page has been founded. It is called Justice for Chloe -Dog shot by Commerce City Co Police.

Interested in signing the petition for Chloe? As of this writing over 8,000 signatures have been collected.