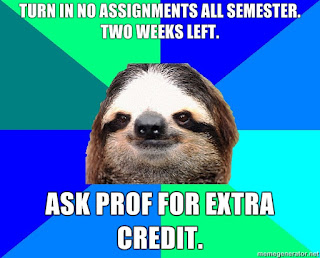 I no longer have the energy to write about this. I have no desire to debate it. It Simply Is.

In the last week, I have heard the following comments:

“Oh come, on…so like, that’s from the Bible, why should we be expected to know that?” (Referring to the phrase, “the Handwriting on the Wall”)

“This guy Bob Fosse…in what class should I have learned that?”

“No, I don’t know the first sentence of the Declaration of Independence…do YOU!?!??!”

“How are we supposed to know who makes the tax rates?”

“Isn’t a Valhalla a car?

From geography to history to literature, I stand in front of classes of students who appear to have never been exposed to even the most basic elements of these disciplines.  The majority can not name the Governor of their home state, or the capital cities of the adjacent states.

We’re speaking of students living in Massachusetts who can’t name all six New England States. College-level Environmental Studies students who have never heard of the term, “barrier beach.”  Americans who can not name the Allied and Axis powers in World War II.

Conservative writers often lament – with good reason – the lack of cultural literacy among American students.  If a student is clueless regarding references to Grant and Lee and Harriet Tubman or Fort Sumter…they will not understand whatever discussion or information follows those references.  If, in a business meeting, managers have no idea what it means to cut the Gordian Knot or to apply Occam's Razor - what will they do when their superiors use such a phrase in an instruction?

Or shall we just require everyone to dumb down their cultural references in order to accommodate ill-equipped, ill-prepared, cavalier, and poorly motivated employees?

But we are not.  We are failing there, too.

Evidence an entire class up in arms because they had to research a topic about which they knew nothing. These students assumed that 'homework' merely meant regurgitating back whatever bits of fact or opinion that they heard five years ago.  The notion of actually conducting research from scholarly, primary sources to learn something new  is a lost art to our students, and throws them into a panic.  “Research,” in another era, meant combing through books, reading, dusting off long-unread documents, hours of synthesizing information, and actual excitement about uncovering new facts.
To far too many students today, "research" means asking the question on Google or parroting whatever Wikipedia offers about a subject. Understanding math means little more than understanding which buttons to push on a calculator.  Putting “effort” into a subject means texting someone a question, and hoping they respond.  If they don’t respond, then the student believes they have done their ‘duty,’ and it’s no longer their fault if the information is not forthcoming.

I am in my 14th year of teaching at the College level, and it's getting worse, not better.

I don’t know what is going on in America’s public schools….but whatever is going on, and for whatever reasons – be they budgetary, economic, familial, social, attitudinal, or technological  – it is not learning.

And it is very scary.